The Magic of Software (Licensing)

Henry Birdseye: “Is it getting to the point where the software is going to cost as much as the machine?”

Unknown: “I think it will get to that, yes.”

Birdseye: “So, if something like that can cost so much. Why not just make your copy?”

Bill Gates: “If you don’t get a legitimate copy, you won’t be… came aware of the improvements, and… overall the impact that type of ripoff is going to have is that people won’t write quality packages.”

Henry Birdseye: “But increasingly, as you begin to (medal?) with the prepackaged things and get a little experience, you just can’t resist the temptation to do some of your own programming. And people are gonna be doing that.”

And yet, 86-DOS — the operating system which Bill Gates, Steve Ballmer and Paul Allen pitched and later licensed to IBM — was actually written by Tim Paterson and called QDOS (Quick and Dirty Operating System).

The irony, however, is that Paterson’s QDOS was hugely ‘influenced’ by CP/M — a widely used and popular operating system at that time written by Gary Kildall.

As a result, IBM PC was running MS-DOS which looked a lot like CP/M but was in fact licensed from Microsoft who bought it for $50,000 from Tim Paterson who originally wrote it to be able to run programs written for CP/M. 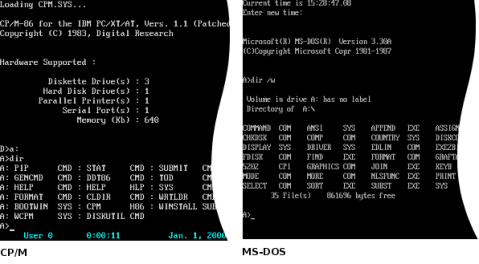 Although no one knows exactly why IBM just didn’t buy CP/M directly, we can clearly see how the very foundation of Microsoft is built on top of good ideas and work of others. I wish they would acknowledge that.

Sharing knowledge and making it accessible for everyone is the only way to foster innovation and make this planet a better place for all of us. Your knowledge and understanding of things becomes brilliant only when others can use it and build on top of it. So, the greatest aspiration one might have is to become a rock solid gear in this timely universe of billion components which makes it tick, tick, tick.